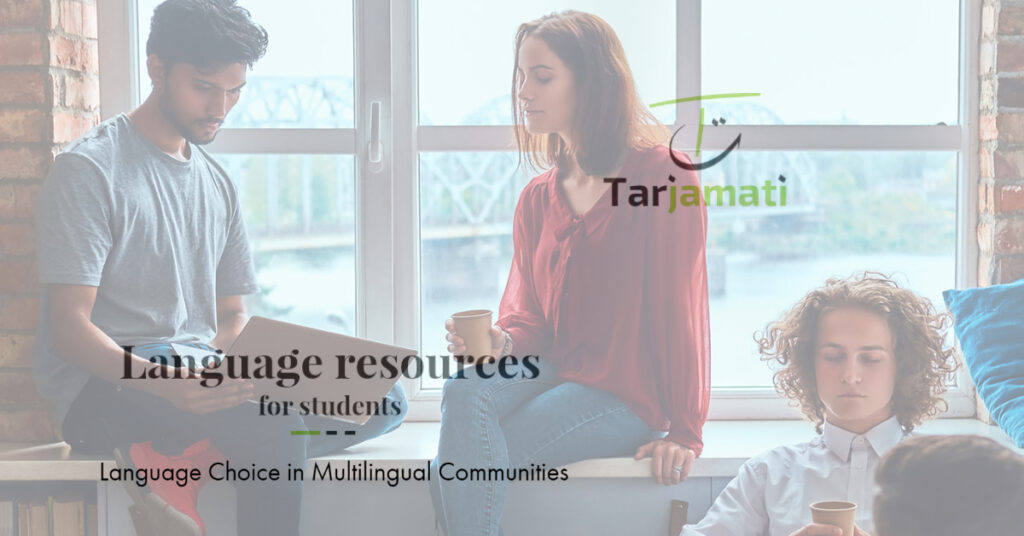 A summary of Chapter Two: “Introduction to Sociolinguistics” by Janet Holmes.

Choosing from the linguistic repertoire is related to Domain, which has become an important linguistic term.

Examples 1, 2 and 3 clarify how the social factors influence the use of linguistic forms. Social factors like participants, setting, topic and purpose make up the Domain. The Domain determines the choice of the code or variety rather than others in our linguistic repertoire.

Ø A term made by the American Sociolinguist, Fishman.

Ø It is a very general concept that depends on three social factors: participants, topic and setting. It involves typical interactions between typical participants in typical settings. For example, in a family domain, the setting would be home, the participants would be family members and the topic would be any family related topic.

Similarly, in Paraguay two languages are used: Spanish and Guarani. The use of each language is determined by domain. For example, if we take the university as a setting, a student and a lecturer as the participants, a lesson discussion as the topic, the domain here will make one choose Spanish, because Spanish is used for education, religion and administration domains. Other domains like family or friendship are related to the use of Guarani.

A bilingual Tongan New Zealander would use Tongan in family interactions in a home setting, the participants will be family members, and the topics will be family activities. All these social factors make up the Domain. However, English will be used in domains like education.

Ø Domain is important for bilingual and multilingual speech communities because it helps in making models that summarize the norms of language use. It forces us to be clear about which domains and varieties are relevant to language choice. Also, it compares patterns of code choice in different speech communities. It also serves as a summary for a newcomer in a community to describe which code to use in a particular situation.

Q- How is code choice governed by social factors?

ü Other than setting, topic and participants, there are other more specific social factors that affect code choice (code switching).

ü The components of a domain are not always related. This means that sometimes a typical setting will not involve a typical interaction. For example, two sisters may not use the local dialect which is the appropriate code related to the domain of “home” while they discuss a school topic, although the local dialect is supposed to be the typical code used for that setting and for these participants. This is because they feel more comfortable in using English, for example, for the school topic they are discussing. This means that the code related to the domain of education is leaking into the domain of home.

Therefore, code switching happens when particular topics are discussed in one code rather than another, regardless of the setting or the addressee.

ü Social dimensions also contribute to code switching. Social distance between the participants determines the use of one code rather than another. For example, the boy living in Zaire will use Swahili with strangers, but he will use Indoubli among his friends or peers. Social Status also determines the use of code switching. For example, in Zaire, a man would use the standard Swahili when talking to a high-level official, a student would also use standard Swahili when talking to his teacher, and a patient will do the same when talking to his doctor. As for Formality, a variety used in the sermon will differ from that used later while speaking individually with the people. The variety used in a radio news report will differ from that used in adverts. Function or the goal of interaction is also important in determining code choice. For example, in Zaire, if a person is applying for a job, he/ she has to use Standard Swahili for this purpose. However, he/she will use Indoubli when talking to a young child and will manage to express his feelings very well by this code choice.

In the narrow sense, Diglossia has the following three characteristics:

2.    Each variety is used for distinct functions. However, the two varieties compliment each other.

3.    The high variety is not used in everyday conversation.

For example, Arabic speaking communities use Fus’ha (Modern Standard Arabic) as the High Variety. It is used for domains of media, education, religion, press etc. Also, the MSA is revered as the language of Koran.

However, each Arab community uses its colloquial dialect which is the Low Variety, such as the Egyptian colloquial Arabic, the Syrian colloquial Arabic and so on depending on Arab different regions. MSA is not used in everyday conversations, and is merely confined to official speaking, writing, and reading. One can does not use MSA while buying food. S/he would sound very funny or outlandish.

In Diglossic communities, although the High and the Low varieties are linguistically related, they differ in some cases. For example, the sounds of Swiss German are different that those of Standard German. The sounds of Egyptian Colloquial are different than those of MSA. The two varieties also differ in Grammar. The H. variety has more complicated grammar than the L variety. Standard German uses more case markers on nouns and tense inflections on verbs than Swiss German. On the level of Vocabulary, the H variety has more technical and formal words because it is used for formal domains, unlike the L variety. For example, in MSA we find many formal words that we can find in Koran or, in lower level, poetry and literature.

Attitudes to H and L varieties also differ. The H variety is held in high regard. It is viewed as the more sophisticated, the prestigious, and the one that enjoys the higher status. It is also described as the fixed and standardized language in grammar books. However, the L variety is not given that quantum of praise. But in many areas in Switzerland, people are quite comfortable when using their L variety. They also use it with strangers. In that case, L variety is valued by some speakers.

In the broader sense, diglossia covers any situation where two languages are used for distinct functions in a speech community. The two languages complement each other. One language is used for H functions, and the other is used for L functions. For example, in Paraguay, where Spanish is appropriate to use, Guarani is not, and vice versa. Characteristics 1 and 3 are dispensed with.

All in all, the L variety is still admired by the people. For example, in Paraguay people take pride in Guarani, which is the L variety. However, some people use the H in home, like in Sauris where parents use Italian with children in order to prepare them for school.